Reinforced Autoclaved Aerated Concrete (RAAC) is a form of steel-reinforced lightweight concrete. Autoclaved Aerated Concrete (AAC) was first created in Sweden in the 1920s as a significantly lighter alternative to traditional concrete mixes and was utilised to create lightweight masonry blocks of the type still commonly used today. By the early 1930s steel reinforcement had been incorporated to create RAAC, allowing for significantly larger structural units such as wall panels, floor and roof planks.

RAAC products are formed by first mixing cement, lime, extremely fine sand or pulverised fuel ash and calcined gypsum. Aluminium powder and water are then added to form a concrete slurry which is then cast in a mould containing the steel reinforcement. The aluminium powder chemically reacts with the lime and water to produce small bubbles of hydrogen gas which causes the mixture to foam, more than doubling its volume. When this foaming reaction finishes, the hydrogen evaporates into the atmosphere leaving a lightweight cellular concrete mixture. Finally, the mould is removed and the product is cured at both high temperature and pressure in an autoclave for around 12 hours, which causes the sand and lime to fuse into a form of calcium silicate hydrate crystal, increasing the strength of the finished product.

RAAC products were first introduced into the UK market in the 1950s and until the mid-1980s were increasingly used in the construction industry. Due to its lightweight, fire resistance and thermal performance, RAAC became popular for use in roof decks and was extensively used as such in both commercial buildings and, particularly, in public sector buildings such as schools, colleges and hospitals. 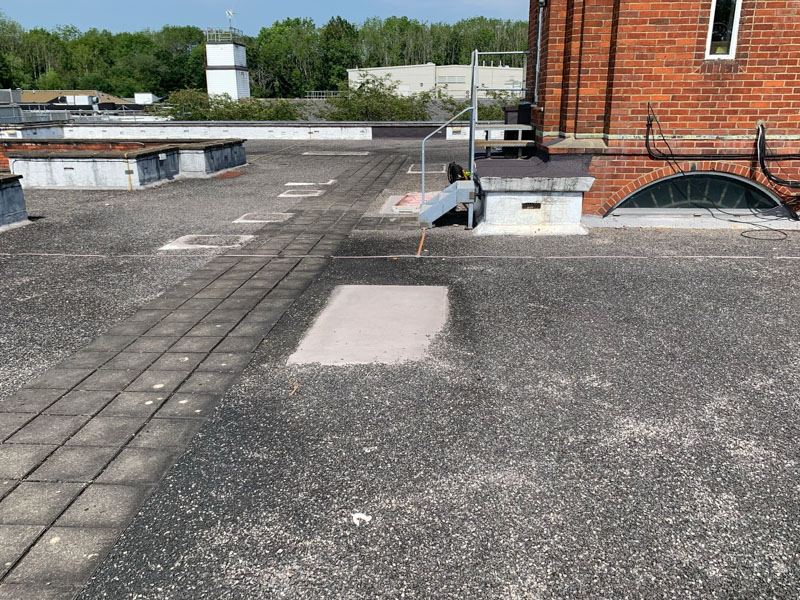 Unfortunately, RAAC’s lightweight properties came at the cost of its structural strength. RAAC does not perform in the same way as traditional reinforced concrete, being significantly more prone to deflection. Due to its porous nature, reinforced steel is more vulnerable to corrosion and, as such, a protective coating of latex cement or bitumen is needed. The ACC also bonds poorly with the reinforcement steel requiring welded crossbars to secure it in place.

By the 1980s, RAAC roof planks installed in the 1960s had begun to fail. Subsequent case studies revealed significant underlying issues with the RAAC roof planks. The steel reinforcement was often insufficiently covered, allowing corrosion to occur. Many roof planks had a high span to depth ratio, meaning that they did not have the suitable capacity to span between bearing points. Often, the steel reinforcement did not extend throughout the complete length of the product and contained an inadequate number of welded crossbars.

In 1996 the BRE published an Information Paper stating that excessive deflections and cracking had been identified in many RAAC roof planks and there was evidence that reinforcement corrosion had occurred. In 2002 the BRE released further information on the performance issues of RAAC roof planks advising that, although in-service performance was judged to be satisfactory, it would be prudent to monitor their actual performance after a number of years. It was determined that the lifespan of RAAC roof planks was about 30 years. As this construction was last used in the 1980s, all RAAC roof decks have now exceeded their estimated lifespan and are required to be replaced in their entirety.

In late 2018, the Local Government Association (LGA) and the Department for Education (DfE) alerted all school building owners about the partial collapse of a flat roof at an Essex school, constructed from RAAC roof planks, which occurred with little warning. Fortunately, this happened at a weekend when the building was unoccupied. The school had recently had a new roofing membrane installed which may have increased the load across the roof. It was also suspected that its darker colouration may have increased the amount of thermal heating to which the RAAC roof planks were exposed, contributing to the failure. All schools and education estates were advised to immediately assess their assets to identify any RAAC roofs, perform a risk assessment and take remedial action where necessary.

The Standing Committee on Structural Safety (SCOSS) released an Alert in May 2019 highlighting that this is a broader issue, as RAAC roof planks were used across many types of buildings. They highlight a case of damage that occurred to RAAC roof planks at a retail premise in early 2019.

Following this Alert, NHS England identified several hospitals that had RAAC roof planks and had serious structural concerns. West Suffolk Hospital, for example, has now had to install 27 metal supports under the RAAC roof planks to mitigate the immediate risks. The government has now set aside £100 million to continue to carry out this urgent remediation work at hospitals affected by RAAC roof plank issues. 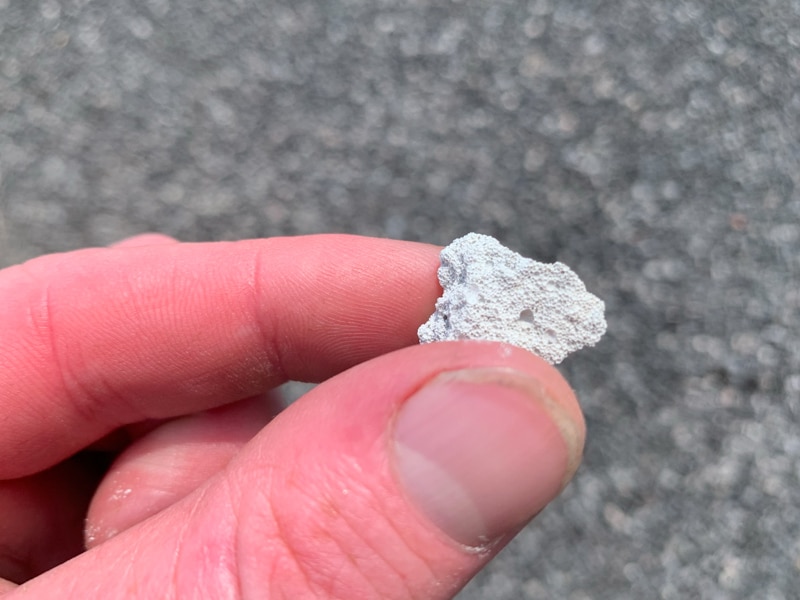 As there is no central register of buildings that used RAAC roof planks, a physical inspection is the best way to identify if your roof deck is constructed using RAAC. Due to the potential dangers involved a detailed risk assessment must be carried out and a safe system of work is planned to allow this identification and inspection to take place.

An owner or building manager can take some steps to assess the probability that they may have a RAAC roof deck:

If you suspect that you do indeed have a RAAC roof deck then there are some warning signs that you should look out for that may indicate that your roof is at serious risk of failure:

Garland UK’s highly skilled Technical Managers are on hand to help, providing a range of technical support services that can analyse the status of a roof in detail and identify if RAAC is present, before securing the best solution to resolve any disruptive challenges for the building.

The first step would be a site visit, during which our Technical Manager will safely gain access to the roof and assess the overall condition of the existing roof system and substrate. Core sampling is used to help establish the exact build-up of a roof by removing a small, swatch-sized patch of the roof. This method of assessment can quickly indicate if the roof deck is made from RAAC. 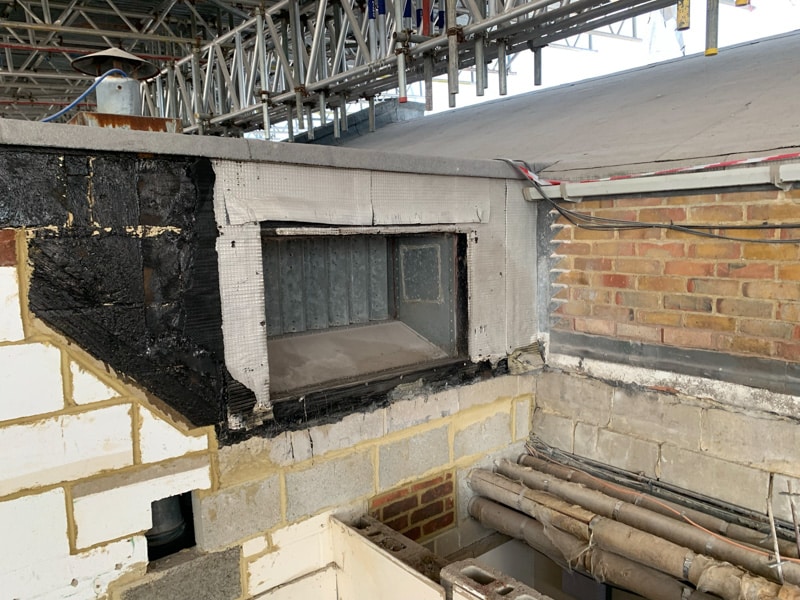 How to tackle RAAC

Once our Technical Managers have conducted the site survey, they will supply a thorough Condition Report, outlining the technical analysis and findings.

If a RAAC roof deck has indeed been found, then a structural engineer could be commissioned to report on the condition of the deck and, if found to be in good structural condition they may deem it possible to overlay with a new membrane. However, it is our strong advice that considering the life span of RAAC roof planks has now been exceeded, this is unlikely to be feasible or safe. Garland UK would not recommend retaining or working on existing RAAC decks.

If a RAAC roof is discovered, we will always recommend to our clients that the RAAC roof should be completely removed and replaced with a suitable timber or metal deck, keeping your building safe and protected for years to come.

Garland UK has a national network of approved contractors with extensive expertise and training who you can trust to complete your work safely and to the highest professional standard, all supported by our up-to-30-year Garland UK Single-Point Guarantee.

“RAAC roof planks were last installed in the 1980s and have now exceeded their 30-year life span. If discovered, we would always recommend their complete removal and replacement with a new roof deck to ensure the continued safety of your building.”

You can find out more about which cookies we are using or switch them off in settings.

This website uses cookies so that we can provide you with the best user experience possible. Cookie information is stored in your browser and performs functions such as recognising you when you return to our website and helping our team to understand which sections of the website you find most interesting and useful.

Strictly Necessary Cookie should be enabled at all times so that we can save your preferences for cookie settings.

If you disable this cookie, we will not be able to save your preferences. This means that every time you visit this website you will need to enable or disable cookies again.